Engagement parties are often hosted by the bride’s parents. If it is more practical for the groom’s parents to host a party, they may do so instead. The invitations say that the event is being held in honor of the couple, although they do not usually mention that it is honor of the engagement.  The guests will undoubtedly figure it out on their own.

If  an engagement is being announced at an engagement party, neither the bride’s name nor the groom’s name should appear on the invitation, as that would likely give away the surprise. The invitations read as though they are not for any special event other than to enjoy the company of family and good friends. 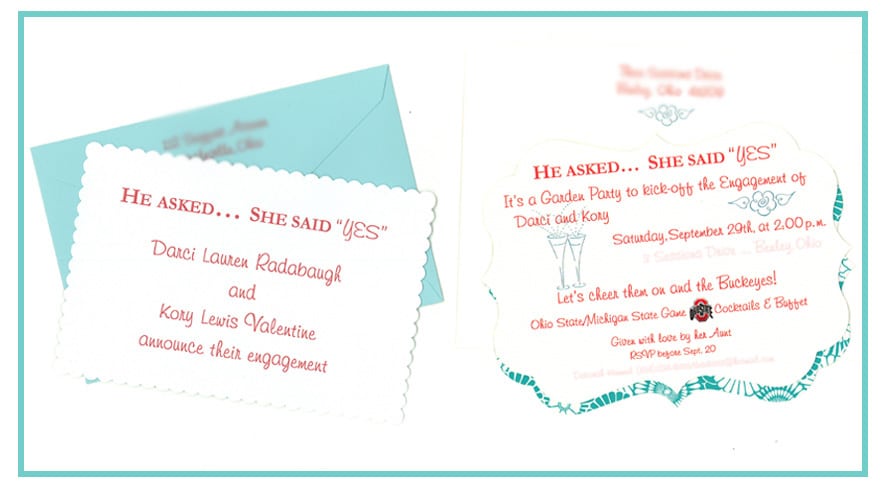 Engagement Party Hosted by Friends of the Parents

When an engagement party is hosted by friends of the parents, the invitations are issued by the hosting friends so their names appear on the first line of the invitation. The parents’ names are not mentioned.

Invitations to Meet the Bride or the Groom

Did you know stationery is one of the most commonly misspelled words?

Stationary: A person or thing that is not moving

Most people don’t realize there are two different spellings for this word!

Fiancé:  The man to whom a woman is engaged

Fiancée: The woman to whom a man is engaged

Coming next: Will you be my bridesmaid?

Charlotte Ferrante was raised in Northern Kentucky and moved to Melbourne in 1978. After studying Fashion Merchandising she opened Decoratifs in downtown Melbourne in 1987. The business began with gifts and tabletop offerings and eventually evolved into bridal registry and invitations. In 2004, Charlotte made a formal transition to creating custom invitations and specializing in stationery and partyware.